Emergency Case
+
Home Uncategorized Anemia: All You Need to Know

Anemia: All You Need to Know

This is a common condition where you lack having healthy red blood cells.  There are Anemia signs to watch out for as the main concern with this is that it does not allow you to have proper oxygen reach your body’s tissues.

When you have this condition, you will feel very weak and lethargic. This kind of condition can actually come in various forms. And there are several reasons for it.

Sometimes having an anemia can actually be a cause of concern and worrisome for something bigger. It can be a warning sign for a far more serious illness.

In this article I am going to be talking in detail about how does this condition stand against various concerns. You need to have proper oxygen to allow all of your cells to get the nutrition they need.

So let’s move on and learn more on the condition of anemia:

This basically happens when the red blood cells in your body begin to lessen gradually. It is actually quite a common disorder.

What causes it is that you have health issues and concerns already in the body. And those begin to interfere with how your body is producing red blood cells. It causes problems with the breaking of these cells.

When you take on a routine blood test, you will notice that anemia is basically having low hemoglobin. This is actually the main element of your red blood cells. It is also which is carrying oxygen to all the different parts of the body.

When somebody is developing anemia, they are called to be ‘anemic’. You will likely be feeling tired and cold most of the time.

If you have anemia, you will have hemoglobin levels that are actually very low. It is a very common blood condition. This condition affects more than a billion worldwide.

Now let’s talk about the symptoms: 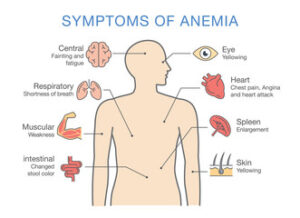 Anemia symptoms can vary. If the anemia is caused by a chronic condition, the disease is masked. However it can be detected through various tests.

A few of the most common symptoms and signs which you are likely to suffer from:

In certain cases, you will only suffer from mild conditions. You probably wouldn’t even notice them. But certain symptoms can even worsen if anemia worsens.

Now let’s move onto the causes:

There are some essential materials which can relate to anemia.  Dietary iron, vitamin B-12, as well as folate are actually quite important elements needed in the body.

The concern with anemia is that it can happen for plenty of reasons. Let’s now talk about those:

Blood Loss- One of Anemia Signs

It is when your body begins to lose blood, you will be drawing water from other tissues as well. This keeps the blood vessels full. The additional water will also dilute the blood, and this will then reduce the red blood cell count.

You know how blood loss is acute as well as rapid and chronic. When you talk of rapid blood loss, it will also include surgery, and even trauma.

But the major reason for chronic blood loss leads to anemia. It can also lead to stomach ulcers, cancer and even tumor.

Some of the major causes of anemia also include: 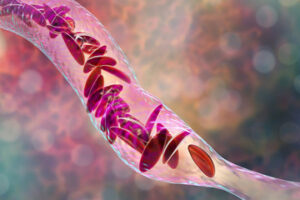 But how does it get affected?

There are a number of diseases which impact the way bone marrow is affected. This includes leukemia. It is a type of cancer which can trigger the production of excessive white blood cells formation.

This will disrupt the production of red blood cells.

When we talk about anemia, there are various symptoms you need to look out for.  There are some forms of anemia which have specific symptoms. These can vary but will include:

This causes you to have mild fever. As well as infrequent infections and even certain skin rashes.

In this kind, the anemia signs is you will  likely suffer from irritability, diarrhea as well as a smooth tongue.

This is something which relates to jaundice. You will also suffer from dark urine as well as fever. There is also an abdominal pain which you suffer from.

This is a state in which you will suffer from painful swelling in the feet and hands. You will also likely have to face the issues of fatigue and jaundice.

The Destruction of RBCs

Did you know that the red blood cells actually have a lifespan of between 120-150days only?

This is in the bloodstream. However in certain cases, the body will actually destroy the cells even before they complete the natural cycle.

Autoimmune hemolytic anemia is one of the most common kinds of anemia. It is when the immune system actually gets confused that the RBCs may actually consider it to be a foreign substance. And it will then attack them.

Other than that, some other relating factors which play a role in the breakdown of these cells, include:

There are also certain risk factors and problems which increase your chances of getting anemia. These will include:

So how to prevent it? Yes, turns out there are some prevention dynamics you can make use of. These will include:

In order to present this kind of condition, one of the leading things you must look into how you can combat iron deficiency. As this is the leading cause of all the issues.

So to do that, you should be eating and consuming a range of fruits and vegetables. Look into consuming many kinds of superfoods.  This will be including lots of vitamins and minerals to enjoy.

Your diet is in your hands. Ensure that it is well-taken care of by consuming a wide variety of vegetables and fruits. This will ensure that there is a minimal risk of you contracting anemia. Watch out for anemia signs and be prepared to take precautions.