Let’s just all admit how much we love our seafood. There is so much variety and it is one of the healthiest options for you to take on. But some people really worry about the mercury in fish.

That means there may be some levels of toxicity in the fish.

In fact, in certain researches, it has been found that there are so many kinds of fish that do contain high levels of mercury.

This article shares more on how you can identify the kind of fish to consume. What is the impact of mercury on the food. And how you can avoid such contamination.

When you have this knowledge, it allows you to make an informed decision and take control of your health.

So let’s look onto why consuming fish is not dangerous. But you have to take on certain precautions to make it work.

Why Mercury in Fish is a Problem?

The first thing to know and talk of is what is mercury basically.

This is actually a very heavy metal that is in air as well as soil and water.

But how does it exist in fish?

It actually exists in three forms- elemental and organic as well as inorganic.

You will probably know that we are getting exposure to mercury in some way.

Even when we are breathing in mercury vapors.

And the exposure to fish happens when they are consuming low concentrations of mercury in water.

Yes, there is water pollution and because of it, the sea life is also suffering through it.

Over time what happens is that these fish will be absorbing the mercury in high content in their bodies. As this is when it takes on an organic form.

And this is when it begins to accumulate higher in people.

In some, there is the definite higher levels of mercury which you need to combat.

So it is wise to not consume such kinds of fish. Avoiding allows you to keep your health in check.

While talking about mercury in fish, it is important that we analyze and speak of ways in which tuna may or may not contain mercury.

The thing is it is really nutritious. Also it serves as a major source of protein.

There are so many fatty acids and B vitamins in it.

But again, there may be high levels of mercury in it.

This is the high level of heavy metal which can cause several problems in the system.

Actually if you look into the research done on the topic- as it turns out tuna will be consisting of far higher levels of mercury than other seafood types.

This includes salmon, oysters, lobsters and even scallops.

Hence for pregnant women and those at higher risk, it is best to avoid consuming tuna altogether.

Taking such high risks will create more problems for you and this should be avoided at all costs.

So while having to consume tuna once a while is fine. The problem begins when you are eating too much.

That will lead to complications in the system too.

Knowing how to combat the same allows you to have a complete knowledge base on ways to tackle the same.

The Accumulation in Humans

Be it Dubai or any Middle Eastern country, you would know how people just love their seafood around here.

And why wouldn’t they?

It is definitely delicious and gets the taste buds all excited.

The thing is that shellfish actually is a major source of mercury.

If you continue to consume it, it will be leading to major health problems.

So it isn’t just a gossip which is spread.

The fact is mercury can very well be harmful.

Basically there are sea plants like algae which is taking the mercury in.

This is then being eaten by the fish.

When they eat it, they will also be absorbing and retaining that same amount of mercury in their bodies.

Also when it comes to what fish, predatory fish actually consume higher levels of mercury in their bodies.

Now let’s look into the details of the negative impact.

Fish that Has Mercury

Let me now highlight and speak of the most common fish that does consist of high levels of mercury. This will include:

However there are also those which consist of low levels of mercury. While the negative impacts are few, they do cause mood swings.

These are the fish which are consumed commonly and allows you to enjoy fish once in a while. They include:

But this is not a complete list. It allows you to handle the whole scenario in ways which 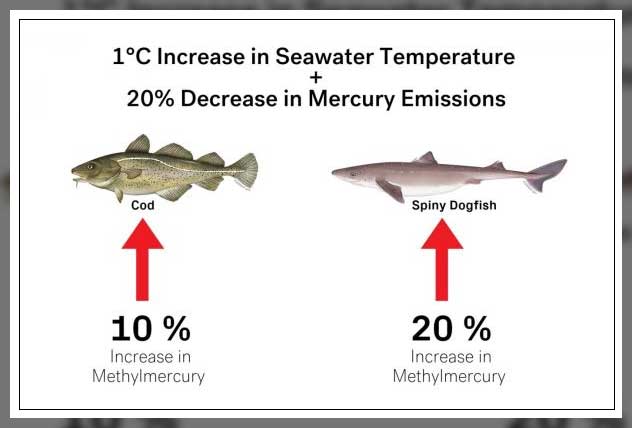 There are definite serious health concerns that you need to look into and analyze.

In both humans and animals, you will notice how this actually leads to major brain problems,

It is important to know and analyze them so to create a complete understanding as to how it is affecting your health.

There has been some serious concerns on how it can actually lead to Alzheimer’s, Parkinson’s as well as autism and even depression and anxiety.

All of this suggests that you will have to make sure your intake of mercury is coming at controlled levels.

There are also concerns on how mercury leads to high blood pressure.

When you are not able to handle this well, it will be leading to you suffering from several ailments.

Heart attacks is also becoming common and should be addressed.

Who is At Greater Risk? 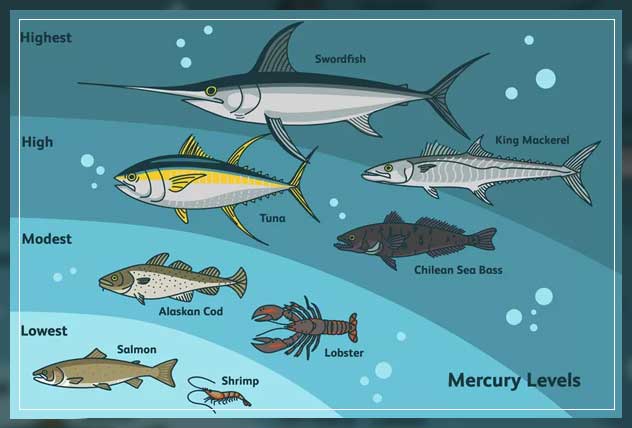 It is important that we analyze and determine as to how is more at risk when it comes to mercury in fish consumption.

The thing is it will not be not affecting every person in the same way.

So there are those group of people who should be taking extra precautions.

One of the people who should take major precautions before consuming fish are pregnant women. They are at high risk.

Also those who are breastfeeding their children and also have young children.

In such cases, it is advisable that you stay away from fish completely.

Also there are fetuses and children who will be more vulnerable to mercury toxicity.

That means it can easily be passed from a pregnant mother to a fetus through breastfeeding.

So it is best that you have a better control and management through this.

It very well also causes you to suffer from issues like having poor memory, or very poor motor functioning skills.

All of this adds up and can cause major concerns and problems.

When we talk of mercury in fish, there are several things to consider and be aware of.

You have to understand how it is definitely a leading way in which your health is going to be impacted.

There are several kinds of fish which actually consist of high levels of mercury.

Knowing so allows you to manage your health in better ways. And that is going to make a difference.

It all comes down to making wise choices as only you can work out what is the best way to handle the condition.